Nicole wrote a post about 10 Memorable Childhood Books, and invited us to play along. Write about books YES PLEASE.

1. The Little House books. I can't choose between them. There are things I love in each book. I wanted to be Laura, although when I reread the books I mainly think what a hard life it must have been. Of course, now that we know that Pa made it quite a bit harder than it had to be, that casts quite a different light on the books, but I still learned a lot about a different time.

2. Little Women. Like everyone else, I loved Jo, cried when Beth died, and hated Amy. I took it personally that Laurie ended up with Amy. Jo was an idiot, I thought. Recently I read Mallory Ortberg's hilarious book Texts From Jane Eyre and the Little Women texts were some of my favorites.

3. The Lion, the Witch, and the Wardrobe. I don't remember how old I was when I read the Narnia books, but I was definitely transported--or I wanted to be. I ached to go to Narnia. The Magicians series by Lev Grossman is an interesting take on what happens to the people who did get to go to their magic land. The main difference is that there is no Godlike benevolent lion to watch over them.

4. The Secret Garden. I read A Little Princess too, but it was this one that captured my imagination. I was oblivious to the racist undertones, or the Christian Scientist ideas of believing until you get better. I remember being a little annoyed by the dialect of Martha and Dickon, but not too much.

5. A Wrinkle in Time. This started me on a journey to read all of Madeleine L'Engle, but Wrinkle remains my favorite of her books. The characters of Mrs. Whatsit, Mrs. Who, and Mrs. Which are so delightful. As one reviewer on Goodreads put it, L'Engle doesn't write down to her young readers. She assumes they will be able to understand enough of the science she is using to follow along...and she's right.

6. Anne of Green Gables. As an adult, I'm actually not that much like Anne. I don't use comically big words or love nature. But when my husband and I were dating, my mother told my husband that if he wanted to understand me, he should watch the miniseries. I've been told I look like Megan Follows as Anne...or at least I did back then. 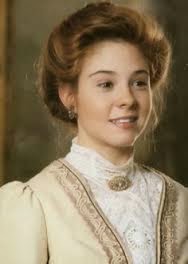 I don't have any pictures of myself as a teenager at the moment so I guess you'll just have to take my word for it.

7. I am so unoriginal. Here's ANOTHER book that every woman my age has on her list. Are You There, God? It's Me, Margaret informed so many of us about bras and periods (I too was mystified by the idea of a belt to attach the pad to; I've heard that the publishers have since updated the text.) Unlike Margaret, I wasn't a late bloomer, so I didn't experience her feeling of being left out, but I did relate to a lot of the book.

8. Anastasia Krupnik. The Anastasia books were just plain fun. I loved the list format and Anastasia's parents were great.

9. The Catcher in the Rye. My dad isn't a reader, but he loved this book. Since my tiny Christian school didn't have a good selection of literature, he took it upon himself to tell me to read this book. I remember being shocked that my dad, a pastor, had recommended a book with so many curse words, but I got over that and immersed myself in the story. Like many classics, the book has meant different things to me at different ages. At first I was like, "This is a teenage book and I will understand it better when I'm older." Then I thought Holden was the coolest. Then, when I was in college, I thought he was a whiny brat. Finally, in my late twenties, I realized he was grieving and it pierced my heart.

10. To Kill a Mockingbird. This is probably my choice for The Great American Novel. (I used to say The Great Gatsby, but my opinions have changed.) I think it's a work of genius and I should definitely reread it before they publish Go, Set a Watchman. I definitely don't think the second book will live up to Mockingbird--but what could?

Alison
I have two amazing offspring, C (13) and L (10). My husband creates cabinets and makes me laugh every day, which is great since I work for him. I'm thankful for my blessings.